Steamboat on the Cumberland
Nashville, Tennessee
1855

at Nashville, Tennessee, shows a paddlewheel riverboat that made regular trips to New Orleans.  This print was restored and hand-colored from an early antique print by southern historical artist George B. Kirchner.  It is one of only two "Official Historical Prints" for Century III. 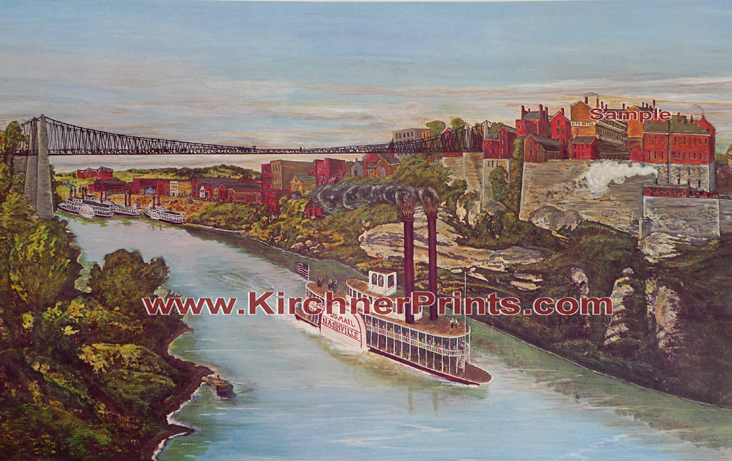 "Steamboat on the Cumberland"

This print was restored and hand-colored from an antique print by George B. Kirchner.  It is one of only two "Official Historical Prints" selected by Century III, the commission established by the Metropolitan Government of Nashville to celebrate Nashville's 200th birthday.  The other print is Kirchner's "The Nashville Inn - 1845".

A regular steamboat on the Cumberland River during the years 1850-60 was the Nashville, No. 6.  She was 500 tons, ran regularly between Nashville and New Orleans, and "was well decorated, but not gaudy, trim but not fragile, at tribute to the city whose name she bore."

Steam-boating was big business because Nashville was the link for middle Tennessee to the Mississippi River and the Gulf of Mexico.

The suspension bridge (Woodland Street) across the Cumberland river was completed in June of 1850.  The toll was 15ó for horse and buggy, 5ó for horseback, and free for pedestrians.  The bridge was cut by the Confederates prior to occupation by the invading Union troops.

The fourth building from the right is the City Hotel, which was on the site of the parking lot of the present day Metro Nashville Court House.  In 1851, Jenny Lind was a guest at the City Hotel.   Andrew Jackson was shot at the City Hotel in a fight with the Benton Brothers.

The dead-end street to the right of the City Hotel is the site of an earlier bridge that had been removed because it was low and obstructed the passage of steamboats.  Today, the Victory Memorial Bridge is located where that old bridge was situated.

Just outside the image on the right side of this print is the site of the old Nashville Inn.

Below Buttons are for Charge or Debit Orders