epitomizes Country Music in the historical former home of the Grand Ole Opry.  George B. Kirchner drew the original using pen and ink and hand colors.  Steamboat captain Thomas Ryman built the Union Gospel Tabernacle for the Reverend Sam Jones after being saved at a revival.  The Grand Ole Opry moved to Opryland in 1975. 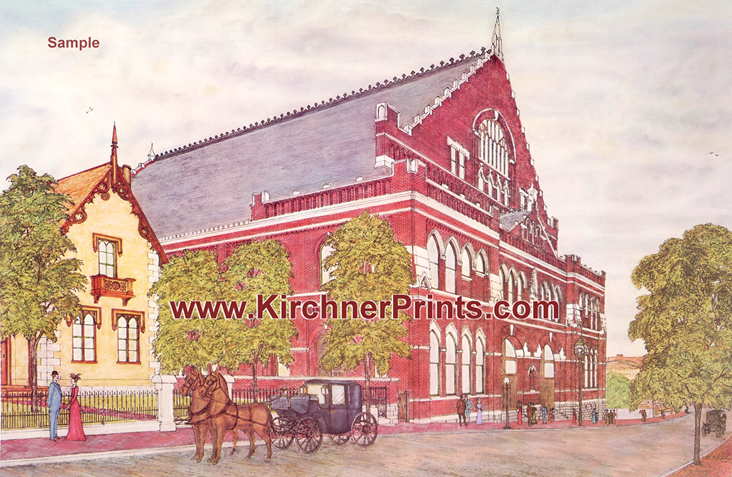 Thomas Ryman (1841 - 1904), was a lusty old steamboat captain of considerable property.  He was brought to Jesus Christ through the teachings of Reverend Sam Jones, and was instrumental in raising and giving funds for the construction of the Union Gospel Tabernacle.  The Tabernacle was completed in 1891, and the Confederate Balcony was added in 1897, for the largest convention held in Nashville by the Confederate Veterans Association.

On the face of the beautiful large lamp at the main entrance were twelve hands (human) representing the twelve Apostles.  Next to each hand were the names of the denominations contributing to the Union Gospel Tabernacle.

The remarkable acoustics of the Ryman became world known and attracted many well known people.  Some of those people are:

George B. Kirchner drew the original using pen and ink and hand colored the detailed print. This Ryman Auditorium print captures the delightfully nostalgic aura of fashionable Nashville just before the turn of the Century.  A brougham carriage awaits the couple with their daughter leaving the Ryman.  A dignified man and an elegant lady are engaged in small talk.  The details in this print took many hours of research from various sources.

Below Buttons are for Charge or Debit Orders